Can You Teach English without Teaching Culture?

Most people would probably answer the above question with an unequivocal "No!"  On top of that, why would you want to teach a language outside the context of the culture that uses the language?  I guess I'm not like most, however, because I can see the point of teaching English in Switzerland, for example, using books that were created with Swiss people in mind - not for immigrants living in the USA and trying to learn American English.

The question of whether you can teach English without teaching culture is worth discussing. Maybe what we need to think about is whose culture we should embed the English in, ours or the culture where English as a foreign language is being taught.

At the beginning of this year in the Saudi Gazette, there was an article about how some Saudi families complained to a Saudi university about teaching English that had "inappropriate pictures and components of Western culture." Will learning English embedded in American culture change the value system and unique cultural views of an Arab student?  Does globalization via language lead to loss of unique cultural identities?

The fear that someone else's different and often attractive new language and culture will displace or "infect" one's own language and culture seems to be built into our human DNA.  This fear has probably existed since the first bands of human beings encountered people from another region, with another language and different customs and dress.  Throughout our history, languages have disappeared along with the indigenous people who spoke these rare tongues and who lived in non-industrialized small-scale societies.  Isn't it a legitimate concern that - with the spread of English and the cultures that embrace it - we will lose linguistic and cultural diversity? Do speakers of major languages such as French, German, Arabic, or Spanish, spoken by millions, have to fear that their cultural values will be destroyed or mutated by English?  Which English is the most dangerous?  After all, English is a national language of England, the USA, Canada, Australia, New Zealand, India, and Singapore as well as several African countries.


I've gathered some links together on the title topic and offer them to my readers for commentary and for cogitation.  For example, here is a discussion started by a well-regarded online ESL instructor. Another teacher argues in an advertisement and blog for its tutoring services that English is not enough. Finally, this one opens up a discussion of how to actually create a class to teach English as a foreign language and be sensitive to the "culture" issue.

As always in teaching a foreign language, the difficulty lies in implementing the principles and theories of cultural relativism in "real" classrooms. Often the books or materials teachers have to work with (if any at all, in some places) have been created for ESL students studying in England, Australia, the USA, or Canada. The vocabulary and topics concern life in those countries where English is the native language but may be inappropriate in Russia or Vietnam.

Going back to the original question at the beginning of this post, can we teach English without teaching culture?  I doubt it.  However, I do think we can incorporate more of the language (vocabulary) and context of the local environment when dealing with students learning English as a foreign language.  What I mean is that if you are teaching American English in Switzerland, for instance, it probably doesn't make sense to use a text that talks about baseball or American football heroes. It makes more sense to give Swiss students language and vocabulary for talking about relevant topics such as Alpine sports, famous Swiss mountaineers, or the cultural norms and customs of Switzerland. Indeed, there are many Englishes, and maybe our texts and other materials should reflect that reality.
Posted by Eleven at 5:12 PM 6 comments:

Labels: language issues, on learning, on teaching, other Englishes, use of English, vocabulary

As you know from previous posts, I enjoy signs in English.  Not only can they be funny, but they contain a lot of useful vocabulary for non-native English speakers.  Recently, while surfing the web, I found this great link at ManyThings.  It has an extensive set of photos of signs in English. Please do have a look.

P.S.  This is an amusing one which works best if you know who Johnny Cash, Bob Hope, and Steve Jobs were, and who Kevin Bacon is.
Posted by Eleven at 3:39 PM 3 comments:

Labels: funny English, on learning, on teaching, photos, use of English, vocabulary

Today my husband set aside a page from our local newspaper because of a very funny headline. This one got by the editor(s), but there must have been numerous readers who called in about the error in word choice/word form.  The headline in the paper edition was 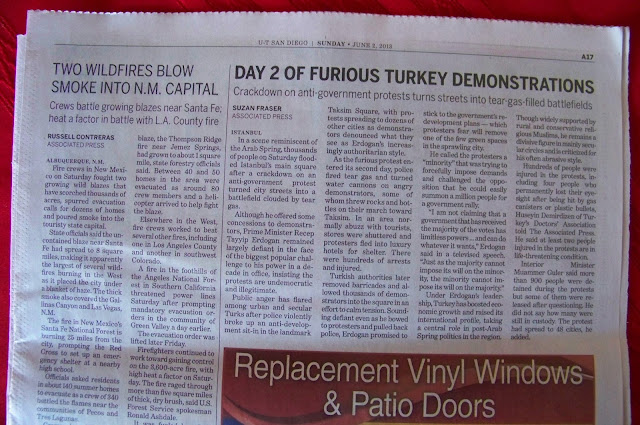 I looked for the link online before photographing the newspaper.  The online edition had been correct(ed) as you can see here.

Do non-native speakers understand why the original headline is so hilarious or strange?  Do you know the bird "turkey," which Americans eat at Thanksgiving?  This headline seems to be announcing that turkeys are furious and demonstrating for the second day.  I wonder if UT San Diego will make a formal apology since the above use of English error makes the reader start off laughing about something serious.
Posted by Eleven at 4:53 PM No comments:

Who's visiting this blog

Where Visitors Come From