Learning English by Looking at Houses 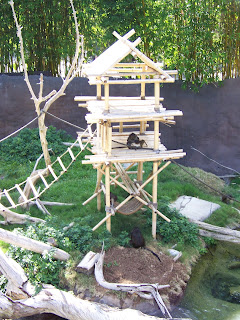 Now you may be looking at this photo and wondering what kind of real estate this is. Well, it's a hangout for monkeys (this is at the San Diego Zoo in San Diego, CA). Zoo architects put up structures that have the basic elements of a house even though these monkeys have probably never been in a human house. What do you see? A roof, different floors, a wooden frame with no windows, a rope ladder for getting to the second story of the building, and a shady view from the bottom floor of the house. Now you have a little language to start with.

Do you see any similarities between this house above and the first one for the monkeys? The roof is the top of the house and protects the people (or monkeys) from rain or too much sunshine. The floor is the flat or horizontal structure on which the inhabitants can stand, lie, groom, play, and place furniture. A house can have more than one floor as the monkey house does. If it does have more than one story (= floor of a building), usually, people have a staircase inside or outside their house to get to the upper level. However, if you build a treehouse for your children, you might use a rope ladder like the one you see in the zoo photo.

Every home has certain basic elements - an entryway or door, walls, a roof (something above your head to keep out the rain and/or sun) and windows or openings to look outside and to let fresh air inside. The photo above of a traditional house from rural Japan shows you what we expect most houses to look like.

A great way to expand your vocabulary in a foreign language - or even in your native language - is to focus on a topic of interest to you. If you're trying to build useful vocabulary about houses or housing, for example, try the real estate section of any newspaper. You can also go online, of course, and do some virtual house-hunting.
Posted by Eleven at 3:59 PM 2 comments:

Recently, I viewed a very funny video about the many meanings of 'shit.' Although I have taught such common four letter words in the past, I wondered how my colleagues and friends (native English speakers and non-native English speakers) would respond to a query about teaching 'shit' to my intermediate-level adult students at a community college. Out of 10 people who responded via FB or email, not one of them waivered. They all said, "Yes, you should teach bad words." One even said that it is my 'responsibility' to teach them.

Here's the video. The performer is Finnish and definitely has a great sense of American English. I don't know if he was a comedian in his native country, but he definitely tickles my funny bone.

What do you think?  I did show this video to my students, and most of them (a dozen) enjoyed it. However, a few didn't seem to 'get' it. When you explain humor, it somehow kills it, so I had a brief follow-up reaction/reflection talk, advising caution (especially to the young adult males in my class) when attempting to use this kind of language with native speakers.

I agree it IS my responsibility as an instructor of English to non-native speakers to teach them awareness and self-consciousness when using four-letter words that can be seen as obscene or irreverent. I also want them to understand that context is extremely important - how powerful a definite or indefinite article is in changing the meaning of an expression. As a student of many foreign languages (Spanish, French, Quechua, Japanese, Arabic, Lingala), I find it easy to put myself in the position of my students. I would want to know these words in other languages I have studied to greater or smaller degrees, so that I might understand if someone is insulting or complimenting me.  It is up to each student to take what I've chosen to give, store it in memory, or throw it away.
Posted by Eleven at 11:20 AM No comments:

The Power of Pronouns

Have you ever thought that your use of pronouns might reflect your level of self-esteem and whether you belong or fit in a group?  Here is a link to a review of James Pennebaker's "The Secret Life of Pronouns." It came from brainpickings.org, which is a site you might want to subscribe to. (I think the name of the site captures the essence of it.)

I often start my ESOL classes with a brief review of the eight parts of speech. I am always amazed at how few students understand that our language and dictionaries are made up of words that belong to certain categories of speech. Why do we do that? It is so we can know how to use the vocabulary in a sentence.

What is a pronoun? Simply defined, it is a word that takes the place of a noun (=a word that refers to a person, place, thing, or idea). However, in English, we should not use a pronoun in a sentence unless it is obvious to the reader or listener what noun you are referring to. Here are some examples:

"She loves to travel overseas."

If you had been talking about Maria previously and said the sentence above, I would assume that you were referring to Maria (="She").

Some languages such as Japanese and Spanish don't require a subject (often played by a noun or pronoun) to start a sentence, so you definitely need to be following the conversation or reading well to understand the subject of a statement.

"Es muy interesante."  what or who is interesting?

For more in-depth coverage of Dr. Pennebaker's fascinating perspective on human social interaction and what language tells about our state of being, I recommend this recent 2017 Apple interview.  It will also connect to education and English language learning.

Posted by Eleven at 9:43 AM No comments:

Labels: language issues, other Englishes, use of English

Teachers also need to get into a growth mindset. That is, we need to focus on our own growth and learning. Sometimes, we are made aware of other strategies for teaching students which are more 'fun' and incorporate more technology. I have done this with my college ESOL students. I get 'stretched' technologically and learn to teach a different skill (beyond English!).

However, after trying out new strategies, I sometimes realize (= learn) that I may have thrown out the baby with the bathwater.  I am constantly being torn between doing what my gut instincts tell me to do, such as drill students and do choral pronunciation exercises, not as a steady diet but intermittently. Yet, I know that by current California standards of project-based learning, someone overseeing me for one class session might view such an activity as very old-fashioned or 'old school.'  If they asked me why I did it, however, there would be many sound reasons (pun intended) based on what I've learned from psycholinguistics and from my own personal journeys sampling or studying several foreign languages (Spanish, French, Quechua, Japanese, Arabic, Lingala, German).

The following Op-Ed article last spring from the Opinion section of the Wall Street Journal (May 13-14, 2017 (Saturday and Sunday), page A11, titled "A Polymath Mastered Math - and So Can You" by James Taranto, who interviewed Barbara Oakley) caught my attention as it forced me to rethink some ideas that I'd been forcing myself to give up. My insides were telling me that many of my students had not done the hard foundation-building labor (often repetitious and drill-like) to control English's many irregular verbs and our variety of tenses. Many were not even aware that there were so many identifiable grammatical structures in English. As a long-term ESOL instructor (nearly 20 years), I have recently been informed that grammar can be 'picked up' in the context of reading, by noticing how writers write. That may work for native speakers much better than it works for non-native speakers because native speakers already have some language intuition, but I often hear from my immigrant students that they want more instruction in grammar, not just passive learning.

What struck me a few years ago in 2016 was that some former Swiss students who came back to the U.S.A. to visit - and reconnected with their former ESL instructor (me) - had not lost much of their English skills from eight years earlier. How was it possible that former students who had not been in the USA for nearly a decade nor been required to use English in their jobs could still produce such coherent and accurate English? How could they still correctly form a question in English and ask if they were using correct grammatical construction (they were! - e.g., present perfect, simple past, conditional, and so on)?  Could it be that they drilled it years before we met and drilled again before the Cambridge Exam? They memorized and practiced English for an expensive test that would mean the difference between getting a raise or moving up the job ladder by proving their overall comprehension of the language.

In the Wall Street journal article, the author of Mindshift (Oakley) says, with respect to learning math and science that "The way you learn intensively for a language is very similar to learning well in math and science." Although some believe that practice and repetition kill creativity, Oakley says, "One mistake we make in the school system is we emphasize understanding. But if you don't build those neural circuits with practice, it'll all slip away. You can understand up the wazoo, but it'll just disappear if you're not practicing with it" (quoted by Taranto in WSJ, 5/13/17).

Ms. Oakley comments that "many, if not most," of her engineering colleagues "are from countries that have educational systems completely antithetical to [ours]. In places like China and India, 'practice and repetition and rote and memorization are really important parts of education.'" Oakley also points out that our Western approaches can enhance creativity, but that "Asian approaches ... build solid foundations in the most difficult disciplines like math and science."

This article resonated with my instincts and thoughts about language learning. My own long journey with foreign languages has definitely impacted my English teaching strategies. Now, I am rethinking my own mindset. Is it fixed, or can I continue to grow and change - the same as I ask of my students?
Posted by Eleven at 3:23 PM No comments:

Labels: language issues, on learning, on teaching, other Englishes, use of English
Older Posts Home
Subscribe to: Posts (Atom)

Where Visitors Come From

Who's visiting this blog